The Venatosaurus, for short, are antagonists in the 2005 remake of King Kong. 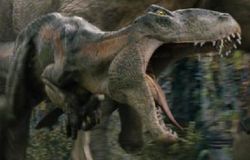 According to Peter Jackson, Venatosaurus is a descendant of Velociraptor that survived the extinction of the dinosaurs and evolved isolated on Skull Island for millions of years.

These dinosaurs were seen startling a group of Brontosauruses, causing a stampede into a narrow section of the island. As the crew of the Venture ran from the sauropods, the Venatosauruses began to prey on both the Venture's crew, and the giant Brontosauruses, taking full advantage of the chaos, one eventually began to trail and attempt to eat Jack Driscoll, who evaded the speedy dinosaur by staying underneath one of the sauropods.

It then became discouraged and began to follow Carl Denham, who was left exposed. As the dinosaur narrowed the gap between itself and Denham, Driscoll shoulder checked the dinosaur, causing it to stumble into a Brontosauruses legs, fall down, and then have its skull crushed underneath the sauropod's foot.

The rest of the group of the predators kept up the chase, following the remaining humans and Brontosaurs into a steep decline. Bruce Baxter then killed a Venatosaurus with his Thompson, however, the leading Brontosaurus fell, as it caught a hail of bullets in the crossfire causing a massive pileup of the dinosaurs, resulting in the deaths of multiple humans and Venatosauruses.

As the remains of the Venture's crew escaped the body pileup, a few of the remaining Venatosauruses ambushed them, and ended up killing the crew's camera man, Herb, much to Denham's dismay.

◾ A cut scene from the 2005 remake involved two Venatosauruses preying on an unfortunate sailor from the Venture.

◾ The licensed game for the film confirms the species is indeed cannibalistic, as two members of the species are seen eating a deceased Venatosaurus.