At first, Speckles seemed to be a reliable friend to Darwin.

However, this were merely a facade to hide his true nature, which is an evil, diabolical, sneaky, cruel, manipulative mastermind. 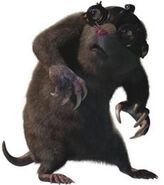 Speckles, as he appears in the video game
Community content is available under CC-BY-SA unless otherwise noted.
Advertisement