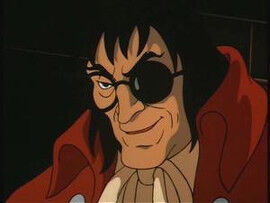 The Sewer King was a character created by Tom Ruegger as a minor villain of Batman. He carries a staff and lives in the sewer-dwelling villain. He also has a legion of runaway children that he uses as pickpockets.

The Sewer King was a man who was poor and shunned by society. He then decided to dwell in the sewers. His real name was never mentioned and is unknown. The Sewer King was able to adapt to the sewer life and trained some alligators as his pets. He also kidnapped some orphans from Gotham and made them work for him in the cold dark sewer. He also struck the orphans with silence and abuse. He marked his territory in the sewers with spray-painted signs say "Beware The Sewer King". He also had his alligators patrol his territory to prevent people from trespassing on his turf. Batman soon encountered some of Sewer King's orphans, who had been committing a series of petty crimes. He managed to save one and soon learned that the boy belonged to a group of forgotten runaways who lived within the Gotham sewer system. He also discovered that the Sewer King forced the children to steal food and supplies for him. Batman went to his underground society and manage to free the orphans, abolished his evil society, and help the orphans find good homes. The Sewer King was arrested and taken to jail while his pets were taken off to the zoo. The Sewer King waited patiently for his pets to free him from prison.

The Sewer King later appeared in the 52 storyline published by DC Comics, and continued his criminal activities as a low-ranking underworld figure, only to be killed by the Intergang boss Bruno "Ugly" Mannheim along with Kite Man, Mirage, and Rawson when he was relunctant to join the Intergang. He attended a meeting of local organized crime bosses in Mannheim's boardroom, he fared rather poorly, and was possibly the first villain to be killed by Mannheim. When the Intergang leader lost his patience with the Sewer King, he was not relunctate to immediately stab the sewer-dwelling villain in the back with a knife , killing him. This continued the Intergang's rise to power in Gotham City outlined in that series. After the Sewer King's death, Intergang erased his name from the public records, as if he never had existed.