Taka, better known as Scar, was the main antagonist of The Lion King and the second season of The Lion Guard and a minor antagonist in The Lion King II: Simba's Pride and The Lion King 1½. He was Simba's arch-nemesis and paternal uncle, Mufasa's arch-rival and younger brother, Shenzi, Banzai and Ed and the other hyenas' former leader and boss, and Zira's husband.

Scar was known to be very resentful of Simba and Mufasa because Simba's birth ruined any chance of him becoming king, suggesting why he envied both of them. His resentment and anger towards Mufasa were strong enough that, after he became king by murdering Mufasa, he outlawed his name being uttered in his presence, especially not in a favorable light and for anyone who defied the law, he would physically assault them. He possessed somewhat of an inferiority complex, which presumably also acted as another reason for his resentment for Mufasa as evidenced by his sad resignation to the fact that he was passed over in the gene pool regarding brute strength.

He was egotistical and prided himself on his intelligence, saying, "As far as brains go, I got the lion's share" and was somewhat of a narcissist, the latter trait being especially prevalent when plotting the murder of Mufasa after Shenzi, Banzai and Ed's failed attempt at murdering young Simba at the Elephant Graveyard, where he mentioned that when he became king, they would see him "for the wonder I am." He had some odd quirks that he was aware of as when young Simba affectionately stated, "You're so weird," Scar told him that he has no idea (though this specific line was an intentional in-joke referring to Reversal of Fortune, in which Jeremy Irons uttered the same line).

He was heavily sardonic, frequently replying to attempts at conversation with sarcasm and subtle insults. After taking over Pride Rock, Scar's overall demeanor took a turn for the worse, becoming somewhat deluded, if not in self-denial, in thinking he was still an efficient ruler, despite clear evidence to the contrary, apparently being unwilling to admit even to himself that Mufasa was a better king or finding fault in his own leadership.

Scar seemed to also develop serious paranoia after Simba returned regarding what he was going to do with him as he tried to attack Simba after he repeated the same words Scar told him when Simba exiled him for murdering Mufasa; there was this fear that Simba would pull a similar stunt that Scar himself pulled on him after he said those words. In addition, when Simba first revealed himself upon his return to Pride Rock before Scar realized who it was, Scar backed away while in disbelief that Mufasa's ghost had returned for revenge. While not a coward at heart, he preferred to run away from situations spiraling out of his control or stronger opponents in hostile pursuit. However, when backed into a corner, he would fight back, though this could also be because he would lose everything if he lost. In the face of his supposed cowardice, he was really strong-willed and determined, defending the throne to his last breath.

He was highly intelligent since he himself liked to boast, easily able to handle situations and conversations to his advantage. However, he was somewhat lazy, hedonistic, selfish, and self-centered, making him be a desperate ruler. However, he was physically weak, by his own admission to Mufasa, which was further demonstrated by his decision to subject Simba to a court rather than fighting him openly. Despite this, he did not appear to mind doing his own hunts as evidenced when he brought a zebra leg for the hyenas. He was a fierce fighter who held his own against the bigger and much younger Simba and came very close to killing him. However, Scar would not hesitate to cheat in a fight, as seen when he flung embers into Simba's eyes, temporarily blinding him, to gain the upper paw. Scar was a very charismatic individual, able to inspire the hyenas to follow his cause and gain fanatical loyalty from Zira and her pride of lionesses, even in death.

Regarding his treatment of Shenzi, Banzai and Ed, he was somewhat harsh with them since he berated them due to their failure to kill Simba and Nala and his angrily kicking them out after Banzai made the mistake of mentioning Mufasa's name. He could barely tolerate the idea of counting on them. Worst of all, when he realized they lied to him about Simba's fate, he gave them a glance that indicated he would deal with them later. Despite this, however, he seemed to value them as friends, as evidenced by his remark when he finds the hyenas waiting for him before he realized they intended to kill him for his remarks, as well as his attempts at apologizing to them falling on deaf ears when he realized it was too late to ask for forgiveness.

He was also a sadist, convincing Simba that he was responsible for Mufasa's death and then taunting him for it further. He even toyed with Zazu whenever the majordomo tried talking back at him. Despite his negative traits, he tried to encourage Zazu to sing a more "bouncy" song, other than "It's a Small World," which he apparently finds to be extremely annoying (like a lot of people do in real life) because when Zazu starts to sing it, Scar snaps at him, telling him to stop ("NO, no! Anything but that!"). 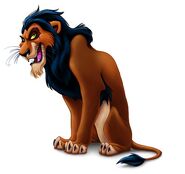