Lots-o'-Huggin' Bear, or simply known as Lotso, is the hidden main antagonist of the 2010 Oscar winning Disney/Pixar film Toy Story 3. He is a large straw berry scented teddy bear. He is Ken, Big Baby, and the other toys' former leader and boss, and the former leader of Sunnyside Daycare Center.

At first, Lotso seems to be a good-natured, calm, and friendly bear until he later reveals his true antagonistic personality as a mean-spirited, cruel, selfish, and brutal bear.

While Woody was at Bonnie's house, Buttercup told him that Lotso is lovable, plush, and huggable on the outside while a monster on the inside and Chuckles explained his story with Lotso to Woody. Whenever he is questioned about his former owner Daisy, he starts to lie constantly and will get angry if he hears a single thing about Daisy. He thinks that Daisy betrayed him, Big Baby, and Chuckles while she actually only replaced Lotso with a duplicate toy (which is the reason for Lotso's evil nature). After Lotso sees that Daisy has bought another Lots-o'-Huggin' Bear, he was sad and torn apart, then snapped. He and Big Baby went to Sunnyside Daycare, to which Lotso became the ruler of. On the other hand, Chuckles was found by Bonnie and she picked him up and took him to her home.

Originally, Lotso was a Christmas present for a young girl named Daisy. Along with Big Baby and Chuckles, he was Daisy's favorite toy and was considered special.

One day, Daisy's parents hit a rest stop and let Daisy go out to play with her toys. However, she ended up falling asleep, so her parents put her back in the car and drove off, accidentally leaving Lotso, Big Baby, and Chuckles behind. After waiting for Daisy to return, she never returned; but Lotso wouldn't give up, so they had to walk all the way back to Daisy's house. Lotso then finds out he has been replaced by another Lotso, which started to anger him. He has been lying to Big Baby about the tragic story ever since, saying that Daisy replaced all of them. Eventually, Lotso, Big Baby, and Chuckles came across Sunnyside Daycare and Lotso took it over and turned it into a prison. He and his henchmen stayed in the Butterfly Room where toys were played with nicely and imprisoned other toys in the Caterpillar room where toys are played with poorly and eventually broken. While Lotso and Big Baby ruled Sunnyside, Chuckles refused to be involved. A young named Bonnie found Chuckles and took him home.

Lotso welcomes Woody, Buzz and their friends to sunnyside. He gives them a tour and assigns them to the caterpillar room, where he knows they'll be destroyed. However Woody leaves to go home to Andy. He makes it out but is found by Bonnie.

Meanwhile Buzz and the others are played with horribly by the kids in the caterpillar room. Buzz spots Lotso and his friends being played with nicely in the Butterfly room and that night, he goes to ask Lotso to transfer Andy's toys to the butterfly room. Lotso agrees to only let Buzz come. However Buzz refuses to leave his friends behind. Lotso then has Buzz switched to Demo Mode, making Buzz his slave. Lotso and his gang then imprison Jessie and the other toys.

The next morning, Woody, who learned the truth about Lotso from Bonnie's toys, returns to Sunnyside to recuse his friends. The toys plan to escape that night and get Buzz back on their side. The toys make to the one way out of the sunnyside, the dumpster, but Lotso and his gang catch them trying to escape. Jessie tells Lotso off for his evil demeanor, calling him a lair and a bully and Barbie agrees with her. Lotso then signals fro Stretch to push the toys into the dumpster but Ken arrives, begging Lotso to spare Barbie. Lotso then tosses Ken to the toys. Woody then tries to remind Lotso of his life with Daisy, in the hopes of redeeming him but Lotso ignores him but Big Baby remembers Daisy. Enraged Lotso snaps at Big Baby and orders a now scared Stretch to push the toys into the dumpster. However Big Baby picks Lotso up, tosses him into the dumpster and closes the lid. The toys run across the dumpster when suddenly Lotso pulls Woody into the dumpster with him. A garbage truck comes by and the toys jump on it to save Woody. They all fall in and the truck takes them to the dump where the toy end up on a convey belt to a shredder. Luckily thanks to Slinky's metal spring, the toys discover the ceiling is a magnet and they all grab metal objects to be saved. Suddenly Lotso appears trapped under a golf bag and Woody, not having the heart to see him shredded, leaps down to save him. Buzz leaps down to help. They use a golf club to pry the bag up then they all shoot up to ceiling on the club. They then go over the shredder and land on another convey belt heading for an incinerator. Lotso spots a button that could stop the belt. He climbs up the ladder but when he reaches the top, he runs away leaving the toys to dies. However they are saved by the Aliens with a giant claw.

Lotso makes his way through and is found by a garbage man who ties him to the front of the truck. 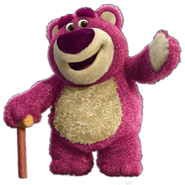 Lotso finding out that he has been replaced 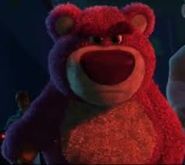