The Joker was the main antagonist of the 2008 film, The Dark Knight. His depiction in The Dark Knight is often considered the darkest version of the Clown Prince of Crime since his early beginnings in DC comics (prior to a softening of character), at least in regards to live action films. Perhaps due to the popularity of The Dark Knight, the mainstream Joker's extreme sociopathic tendencies have begun to be more emphasized.

He was portrayed by the late Heath Ledger.

No one knows who the Joker really was. Little could be confirmed about his early life before he turned to a life of crime. Despite his capture, no traces could be found on his fingerprints, dental records, or DNA matches against the GCPD's databases.

In a report filed by the GCPD, there were three theories presented for Joker's identity and origin. The first was that Joker was an escaped patient from Arkham Asylum. However, that theory was debunked on the basis that his identity had no basis within any records. The second theory was that Joker was a former employee of the Harley Brothers Circus, which was documented to have connections with the mob. It was reasonable to theorize that Joker was a disgruntled former employee that had bad business with the mob. The third theory presented was that Joker was a former soldier who suffered from acute PTSD, which explained his cool demeanor and familiarity with weapons, as well as his devastating effectiveness in various forms of combat.

Shortly after the death of Ra's Al Ghul, Batman discussed with Lt. James Gordon the effect that he had made on Gotham City since his appearance. Gordon then revealed that a criminal with a "taste of theatrics" had recently committed a double homicide and an armed robbery, and left behind a Joker Card as a "calling card". Gordon also warned that just as escalation occurred in terms of a Police Force against crime, so might the scale and style of criminality change in reaction to Batman's appearance.

Some time after, Joker orchestrated the theft of a large shipment of ammonium nitrate from the Gotham Docks. The explosive chemical was saved for storage in the Gotham General Hospital and on two passenger ferries some time later. In addition, Joker also frequently attended the various heists and crimes that his gang committed while disguised as one of the accomplices, which was believed to be at least partially where he got his name from.

Several months later, a group of bank robbers under the direction of the Joker, robbed the Gotham Bank which was used as a money-laundering front for Gotham's gangs. The clown mask wearing robbers whittled down their own numbers within minutes in a series of calculated betrayals. Finally only "Bozo" remained, who revealed himself as the Joker to the Gotham Bank Manager, who had earlier confronted the robbers with a shotgun. In addition, largely because he couldn't resist appearing on-camera, Joker also deliberately unmasked himself in front of a surveillance camera and posed. The Joker then escaped with the bank's cash in a yellow school bus, concealed his identity by driving within a convoy of other school buses, and also left the bank manager at the mercy of a gas grenade that was stuck in his mouth.

Dealing with the Mob

Shortly following the bank robbery, an Italian crime boss mentioned the Joker's recent theft of Mob owned cash to his fellow crime leaders at a business meeting, dismissed him as a threat, and said that he was a "nobody" who wore a "cheap purple suit and make-up." The Joker, overhead that comment and the plan presented to the Mob by Chinese mobster, Lau, arrived unannounced at the meeting while he faiked a laugh, as he saw their "so called plan" as a bad joke. The mobsters were at first unwilling to hear him out, and Gambol, one of the crime lords who seemed to take the most dislike for the Joker, sent one of his men to take him out by force.

The Joker stated that he wouldn't kill Batman because he was simply too much "fun" and Batman wouldn't kill him because of his "mortal obligation". In the film, instead of trying to kill Batman, the Joker attempted to show Gotham and subsequently Batman that anyone could be as bad as him under the right circumstances.

The Joker unexpectedly performed a magic trick by making a pencil "disappear," embedded the pencil in the table, and shoved Gambol's man head-first into the pencil where it indeed disappear inside the man's head, which instantly killed him. The Joker also mentioned that his suit wasn't cheap and that they ought to know that since they bought it, which meant that he had used the money that he had stolen at the start of the film to buy his suit. Joker proposed that it was Batman's interference that had resulted in idealistic leaders like Harvey Dent rising in popularity, and offered his services to kill him for half of all the money that Lau, an illegimate Chinese account, took away from Gotham for safe keeping. Joker also warned the Mob that Lau would betray them if he was arrested, and claimed to know a squealer when he saw one. While the Bratva mobster, the Chechen and Maroni were interested, Gambol, angered by the Joker's lack of respect, attempted to attack him, which forced the Joker to reveal his insurance policy: several grenades hidden under his coat, which allowed him to make a quick escape.

Frustrated, Gambol proceeded to put a bounty on the Joker: $500, 000 dead or $1 million alive so he could "teach him some manners." The Joker later took revenge that night by having his men come to Gambol, and claimed that they had killed the Joker. In a bit of unintended tragic irony that regarded the fate of his actor, the Joker's 'dead' body was brought inside a garbage bag before he attacked Gambol and proceeded to tell him the origin of his mouth scars as a way of psychological torture and intimidation.

The Ace in The Hole and Defeat

The Joker holds his card

Joker's laughing despite being defeated

The Joker in prison

Joker is interrogated by Batman

The Joker, without his makeup, while disguised as a policeman 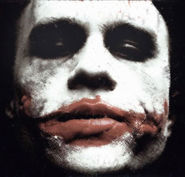 Joker drives in a police car

Joker holds a knife in a promo photo 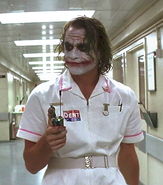 Joker gets out from the General Hospital of Gotham, dressed as a nurse with the bomb explosives trigger after making a deal with Harvey Two-Face

Joker discusses with the mobsters