Grumpy (Land of the Lost)

Grumpy is a Tyrannosaurus rex who is featured as one of the main villains in the 1974 TV series, Land of the Lost and later as the secondary antagonist turned supporting protagonist in the 2009 adaptation of the same name.

Grumpy appears frequently in the TV series. He is always shown chasing the Marshalls and trying to eat them. He is featured by everyone in the Land of the Lost, except by the Allosaurus Big Alice and the two fought each other on occasions, though in one episode they team up to try and hunt down the Marshalls. He was the first dinosaur the Marshalls encountered and the one who caused Cha-ka to fall and fracture his leg in the first episode. 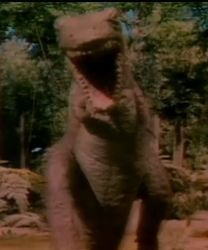 Grumpy in the TV series 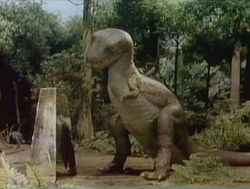 Grumpy and a Pylon 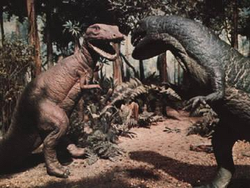 Some fans speculate that the T-Rex Scarface from the 1991 series is actually Grumpy of the original series. 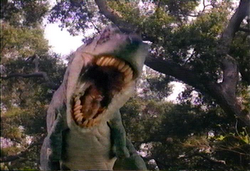 Scarface from the 1991 series

Three years before the film events, an astronaut was transported in the Land of the Lost after passing in a time warp. Grumpy finds him and devours him.