In Star Wars Episode III: Revenge of the Sith, General Grievous holds Supreme Chancellor Palpatine hostage aboard his flagship Invisible Hand. After a rescue operation results in Count Dooku's death at Anakin Skywalker's hands, Grievous retreats from the battle after the Jedi infiltrate his command bridge and later takes command over the Separatist Council.

Now the Republic's top priority, Grievous takes refuge on the sinkhole planet Utapau, the Separatist Council's base. Under orders from Darth Sidious, Grievous relocates the Council to the volcanic planet Mustafar. After Palpatine authorizies an invasion of Utapau, Grievous engages Obi-Wan Kenobi in a lightsaber duel. When Kenobi gains an early advantage, Grievous flees the scene towards his starfighter with Kenobi hot on his heels. The chase ends at Grievous's secret hangar where the pair fight hand to hand. Making use of his robotic body, the General has the clear advantage in the brawl and prepares to kill Kenobi but the Jedi Master manages to rip open his chestplate in the process. Using the Force to pull Grievous's blaster to him, Kenobi fires five shots into the cyborg's heart, incinerating him from the inside. 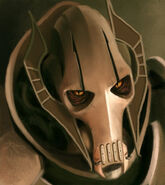 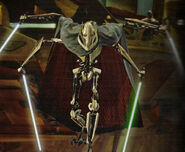