Bruce the Shark is the titular primary antagonist of the 1974 best-selling novel Jaws by Peter Benchley, and its 1975 critically-acclaimed summer blockbuster adaption of the same name directed by Steven Spielberg. He is a 25 foot long, 3 ton Great White Shark who kills anything by eating, because of the hunger drains too quickly, it cannot stop eating because of it's intention to survive in the marine environment.

First Attacks and the Bounty

One night in Amity Island, a bunch of college and high school students are having a beach party, where a girl named Chrissie Watkins and a guy named Tom Cassidy share eye contact. Chrissie decides to go skinny dipping in the ocean, but Tom passes out due to drinking. "More coming soon".

Finding the shark's tooth and Fourth of July

Appearances in other media

Quint after the Shark has finished with him 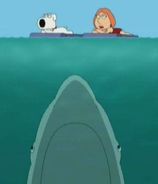 Bruce sinks to the bottom of the sea after the explosion 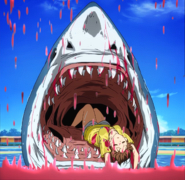 Jaw of Amagi Brilliant Park doing a Shout Out of Jaws
Community content is available under CC-BY-SA unless otherwise noted.
Advertisement