The Birds are the main antagonists in the 2010 independent movie Birdemic (also known as Birdemic: Shock and Terror) and it's sequel.

They are created by global warming which made them very angry and granted them the power to explode into balls of pure flame. They kill many people in their rampage across the world. For some reason they make the sounds of zero dive bombers

The film ends as the birds fly into the sunset. 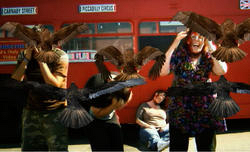